Is it even a holiday without green bean casserole? This version is much more flavorful than the traditional soup-from-a-can kind. Bacon is the base for the sauce, and then adding garlic?? Mmmmmhmmmm. It is a leeeeetle bit last minute, so what I like to do is cover the whole platter up with foil and leave it in the oven on the warm setting until it’s ready to be served. This recipe is soon to be featured on the Highbrow Downhome Christmas Special, airing in December 16! 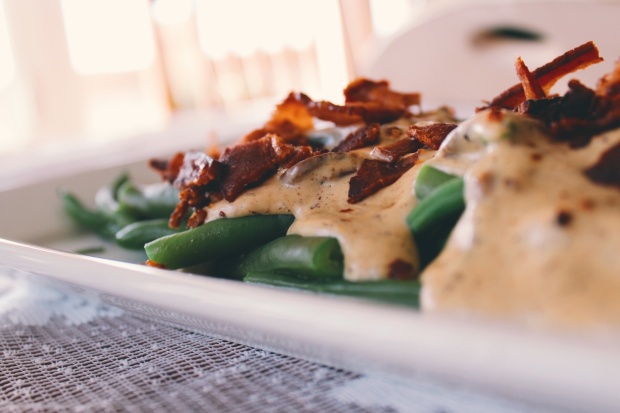 Get a big ol’ pot of salted water going, and add the beans to it, boil until they’re fork tender, about 15-20 minutes. Remove from heat, but keep them hot in the pot until they’re ready to serve.

In the meantime, add the bacon to a skillet and cook until crispy. Remove from the skillet and set aside, reserving the drippings in the pan.

Add your sliced mushrooms to the skillet and sauté on medium heat for 3 minutes until the mushrooms are tender, but still firm. Sprinkle in the tablespoon of flour and stir it around, coating all the mushrooms, and stir in the chicken broth. Add in the garlic and push it around for 1 minute. Don’t overdo it or it gets black and bitter.

Next comes the half and half and heavy cream. Stir constantly until everything is incorporated. Add in salt nd pepper to taste, you likely won’t need much salt since th bacon is so salty! Turn the heat to low.

Crumble the reserved bacon into small hunks. Remove the green beans from the pot. I like to lay them all out on a platter. Pour that gorgeous mushroom sauce all over the top, and then sprinkle the bacon all over. If you’re feeling extra, have some minced parsley on hand and sprinkle that over too, it’s pretty and adds a pop of freshness! Bon appetit!

This site uses Akismet to reduce spam. Learn how your comment data is processed.