So I’m a musical theatre nerd, and as posted a few weeks ago, I was given the opportunity to play Ado Annie in Oklahoma! After weeks and weeks of rehearsing, we finally opened on Friday!! Here are a few pics from this magical weekend! The obligatory selfie:

Here I am with the men in my onstage life! My dad, Andrew Carnes, Ali Hakim, and Will again. The scene between Ado, Carnes and Ali is the highlight of the show, for me anyway! My dad threatens Ali with a shotgun and Ali’s world comes crumbling down around his ears, and Ado Annie is blissfully unaware of all of it, ha ha. 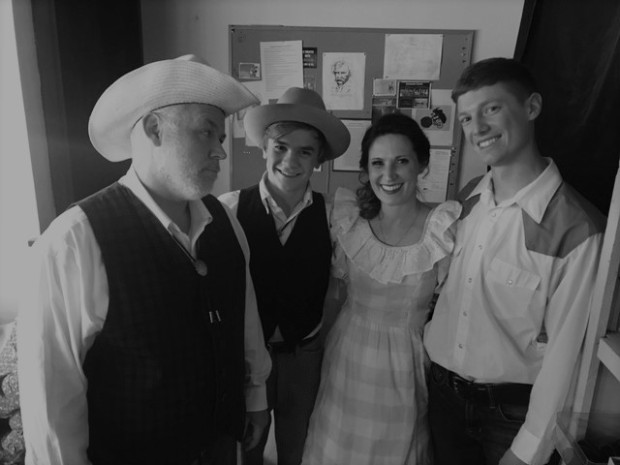 And here I am with my Will Parker, who’s probably the sweetest scene partner I’ve ever had. Oklahoma was his first play EVERRR! Poor guy! So, he was thrown into this role where he had to smooch me, sing AND dance onstage for the first time, and he’s doing a beautiful job.  He was always open to suggestions and trying new things, bless his heart!  He didn’t mind if  something didn’t work, he just went with it! He was always willing to run lines, or practice the infamous Oklahoma Hello (he flips me up in the air!!!) no matter how many time I wanted to run it. We were both pretty nervous about having to kiss (we’re both married obvs.), but as soon as we did, we just developed this little rapport that wasn’t there before! Stage relationships, I tell ya, they’re funny things! Anyway, he’s the sweetest guy!

I think we make a pretty sweet couple! It’s just been the time of my life, the cast is all really nice, no exception, and it was cast pretty perfectly.

And if you recall it all started with this:

Did this dream (and it HAS been a dream, I don’t even care that it’s “only” community theatre) come true because I wrote it down?

It’s hard to say, but it certainly didn’t hurt!

This site uses Akismet to reduce spam. Learn how your comment data is processed.